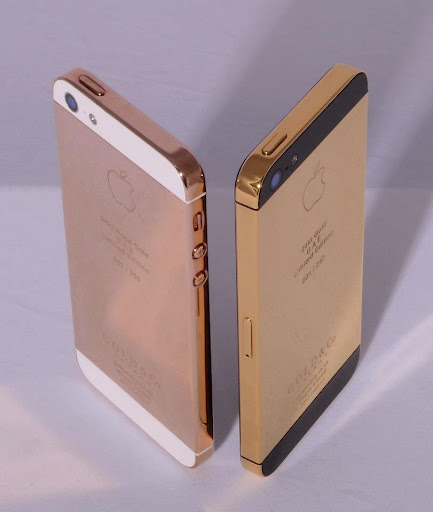 Jewellery & gadgets have been the ruling elements in the market and are always on upsurge and innovation. If gold power is merged with money power in form of coins the value gets doubled up. In the same manner, if gold power is merged with gadget power then records are obvious to be established. Indulging luxury in the play of gadgets can really make the market happening with cash registers ringing. The logic behind this phenomenon is obvious as it’s the amalgamation of both luxuries (gold and gadgets) which makes it most popular and eye catching. When it comes to merging luxury mobile phones with gold power, then Goldgenie PVT LTD comes into the scene. This company has ensured the endearing combination of gold and gadgets and has launched limited editions of gold plated luxury mobiles, iphone, ipads and many more accessories. Goldgenie has its headquarters in U.K. As diamond studding and laser engraving is related, its territorial partner AARI makes sure about it.

The first and record setting achievement in arena of 24 Karat Gold plated phones is Iphone 5 by Gold & Co of London. Vipul Shah, director of Goldgenie, speaks his mind on the same, “With Goldgenie, we wish to add a dash of personalized sophistication and glamour to the existing range of personalised gadgets available in markets today. ‘Goldgenie’ is sure to transform your ordinary gadget into a unique symbol of your style and stature that you can flaunt along! What’s more, you can also add a dash of bling to it with a diamond or give it a personal touch with your name or signature engraved on it.”

This edition is reportedly strictly limited and is also available in rose gold. Phones are packed in handcrafted premium wooden boxes with certificate and guarantee. With four inches retina display screen that is 18 percent thinner and 20 percent lighter, this iphone5 is no doubt the btter version of Iphone 4s.

For the apt display for apps in industry iphone 5 has been endowed with 40 % more color saturated screen and dual faster A6 processor. Adding one more panoramic feather to its feature’s cap is its 8 MP camera which clicks outstanding views.

This is not it. Apart from the look and luxury aspect of Iphone, special care has been taken while choosing the ear pods after digitally scanning and experimenting with more than 100 people.

The specialty about this phone is that its chips are capable of receiving heavy doses of bandwidth and thus can deliver the best services while receiving 100 Mbps per second. New connector has been launched and which denotes that old phone accessories would be of no use with this 5th edition of golden Apple iphone.

Many new innovations are taking place in the luxurious empire of gigantic gadgets and are being attached with gold power. On one side where dollar is surging high and rupee is slumping down and skyrocketed gold prices have been disappointing gold buyers, this new amalgamation may prove to be the silver lining in the dark sky. Vertu mobiles might have initiated the trend but to set it as trend, Apple may be the milestone.