Old is gold has been turning real when we look the growth rate of gold market in world. Growth graph of Gold was riding high before two years has suddenly sunken to the hilt.

India is the biggest Gold loving nation with the highest consumption rates of gold. Greater China after India is also contributing huge to the graph of growth in gold rates and market strategies. According to the World Gold Council Gold demand fell to its lowest level in more than two years in the second quarter.

WGC said in its report, “Overall gold consumption fell 7 percent or nearly 76 tons to 990 tons in the three months to June, its lowest quarterly level since the first three months of 2010.”

According to the facts and reports, India’s demand for gold jewellery fell 30% in the second quarter a year ago. The first quarter noted decline of 19% and the second came with 44%. WGC further revealed, “Demand for total bar and coin investment was down 51 percent, and overall consumer demand was down 38 percent.” 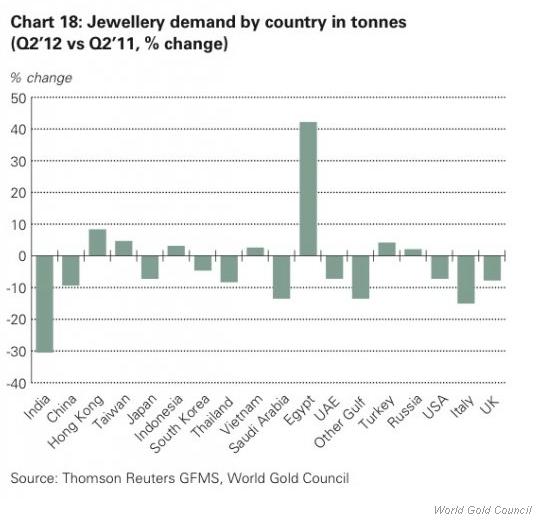 Grubb further said, “The real wild card is India. It depends how weak the latter part of the year is and/or how much of an improvement we see. It also depends on what happens from a macro perspective between now and the end of the year to catalyze more buying. “In that scenario, you would see gold demand higher than last year. In a scenario that is more benign, where we don’t have a major event by the end of the year, and India improves (only) a bit, it will be very close to last year. I think the problem you have in India now is although the disruption to the market is over, we’ve seen a very weak rupee and that has meant that gold prices in rupee terms are extremely high. They’ve been around all-time highs of INR28, 000 to INR30, 000 per 10 grams even whilst the price has been range trading around $1500 to $1550 for nine to 12 months now. So that has definitely damped consumer demand in India.”

Why Gold went down?

There are many reasons according to the economic surveys and reports but the major ones that affect it are:

Countries which contribute to the maximum in the growth of Gold market are as following.

Grubb further said for future expectations, “It’s probable that the rupee will have a better second half and that might stem some of the decline in gold demand.”

“Also, you have a seasonally stronger period for gold demand because you have Diwali and other festivals. So we’re forecasting a better second half but still a very challenging environment in India for gold.” He further added.

The solution points towards the need of healthy gold friendly economical policies in India and other countries and right monsoon success and according lucrative gold import policies; if all that is not executed, there is possibility of China going ahead in the race.