Diamonds are valuable. They consists universal appeal and presence to be traded across the globe. Thus it is essential to have a universal grading system to appraise their quality. Thus in the 1940’s GIA (Gemological Institute of America) developed the 4Cs grading system.

4Cs has become an internationally accepted diamond grading system to compare and evaluate not only diamonds but few other gemstones also. 4Cs rule set is divided in four different tests naming Carat, Color, Clarity and Cut.

Carat
It’s similarity with ‘karat’ confuses many people however both are different. Carat is a weight measurement unit for gemstones and karat is referred to gold purity. A carat is equal to 0.2 grams (or 200 milligrams) and 5 carats make a gram. Alike Dollar (divided into 100 pennies) a carat is divided into 100 points. For example if a diamond’s weight is 0.70 carats, it will be described as 70-point carats.

Color
Usually flawless color diamonds are regarded as precious, valuable and to store in treasure but GIA’s system does not approve this. GIA’s scale grading for color begins with D and goes up to Z. D represents flawless, ideal colorless stone followed by other alphabet letters increasing presence of color to the letter Z. Every letter has a range of color appearance. This color grading test is testified under controlled lighting and precise (synonym) viewing conditions.

Clarity
A diamond’s clarity plays significant role into deciding its quality and price. Usually diamond comes with birthmarks or slightly color marks. GIA’s international diamond clarity grading system starts from flawless (FL) to diamonds with obvious inclusions (I3). FL (Flawless) is given to unblemished, unmarked diamonds after examining using 10 x magnifications. FL is followed by other marks including Internally Flawless (IF), Very, Very Slightly Including (VVS1 and VVS2), Slightly Included (SI1 and SI2) and Included (I1, I2 and I3) under 10 x magnification.

Cut
A diamond’s cut is major factor into deciding its brilliance, fire and scintillation (or luster). Traditionally round brilliant cut diamond with 57 or 58 facets is considered as the best stone cut because it allows stone to exhibit extraordinary flashes of bright shine. Besides brilliant round cut marquise, pear, oval and emerald cuts are also in fashion with few more fancy cuts such as hearts, cushions and triangles.

In 2005, GIA introduced a new diamond cut grading system after 15 years of intense research and testing. The grading system evaluates a diamond on the basis of its cut, ration from top to bottom, size of crown, girdle and pavilion. This grade scale ranges from D to Z representing excellent to poor quality of a diamond. 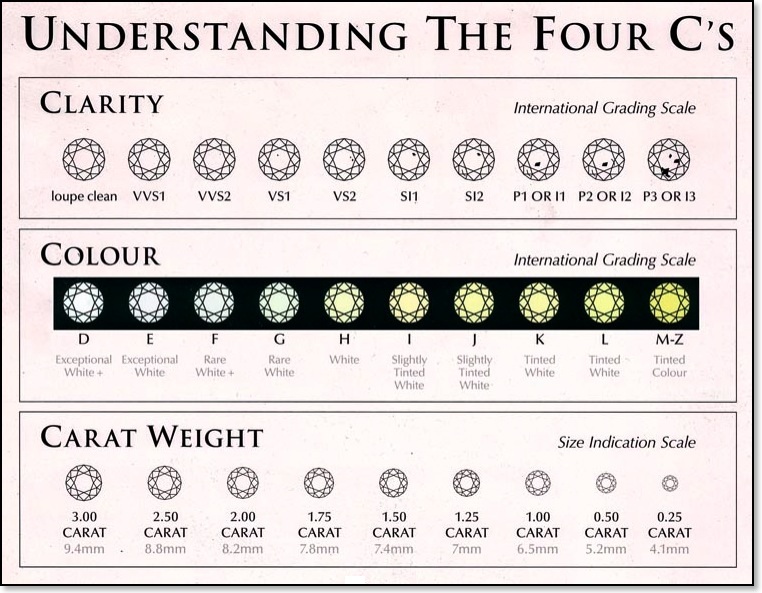