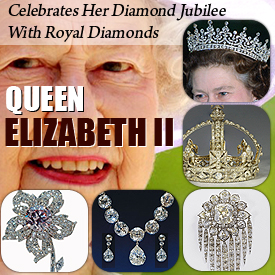 Once depicted as “Fairytale Queen”, Queen Elizabeth II, Queen of the Commonwealth realms, has completed her 60 years of reign in February 2012. Her Highness is the second- longest British Monarch after Queen Victoria (1837-1901) to celebrate her reign’s Diamond Jubilee. Her Highness, Queen Elizabeth II, has been an influential personality in her nation and her charm has grown world wide making her a successful Leader, and so, she has been symbolized with Stability by many historians.

To celebrate this Magnanimous Personality, a remarkable 1,100 diamonds are to be used in a portrait of The Queen to mark the Diamond Jubilee. The diamonds are donated by Master jewelers, Asprey, and are working with the specialist ‘light’ artist Chris Levine. Chris will re-create a portrait of the Queen wearing a crown she wore to her coronation in 1953. It is an estimate that 15 different sizes of diamonds will be used in the portrait, which will value the portrait as the most expensive portrait of a monarch ever to have been commissioned. An auction for this portrait named, Diamond Queen, will take place in a sealed bid during the Jubilee celebration in June 2012.

The Diamond Jubilee will be celebrated with, a series of regional, national and international events during, culminating in a four-day long Bank Holiday weekend in June, this year. Amongst many highlights, one is the spectacular River Thames pageant featuring a 1,000-strong flotilla and a St Paul’s Cathedral service of thanksgiving.

The other important highlight of the event is a diamond exhibition. The exhibition titled “Diamonds: A Jubilee Celebration” will be held at Buckingham Palace in August and September this year. This will showcase Diamonds worn by Her Highness, as well as other British Monarchs for the last Two Centuries.

On display would be the world renowned Royal Jewels such as,

 The Girls of Great Britain and Ireland Tiara, which was given to the future Queen Elizabeth II as a wedding present in 1947.

 Williamson Diamond Brooch, which is crafted in the shape of an alpine rose. It features a remarkable 23.6 carat pink diamond at the centre.

 The Miniature Crown worn by Queen Victoria for her Diamond Jubilee portrait in 1897. The crown holds 1,187 diamonds and is approximately 9cm. The crown was also made by R & S Garrard in 1870.

 The Diamond Coronation Necklace and Earrings, which were originally created for Queen Victoria and later worn by Queen Alexandra, Queen Mary, The Queen Mother and Queen Elizabeth II at their coronations.

Along with these heavenly Jewels, the numerous Tiaras, Diadems, Crowns, Earrings, Rings, Necklaces and many more would be exhibited as a feast to our eyes, as part of the Diamond Jubilee with events starting from June.

Till then, let’s drool over the majestic designs, 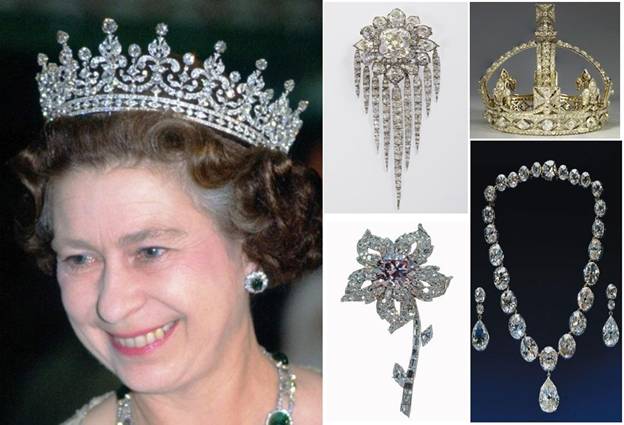