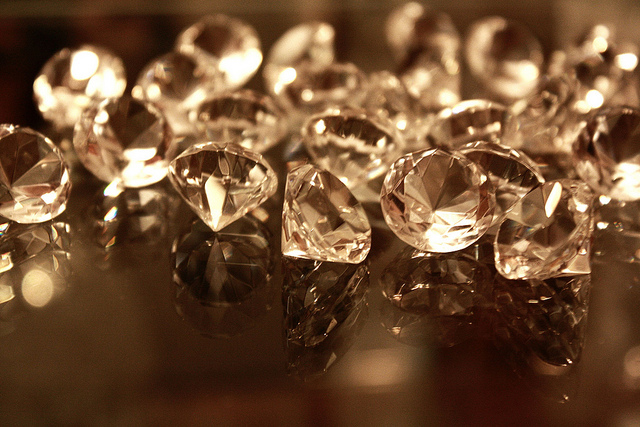 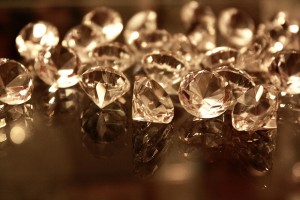 While Henry Kissinger was asked to define a diamond, he said, “A diamond is a chunk of coal that is made good under pressure.” Surprisingly diamond is an isotope of coal in which carbon atoms are arranged in a 3-D symmetrical order; which gives it extraordinary qualities like ultimate optical reflection, toughest hardness, and transparency unlikely a coal or graphite which are close relatives of diamond.

What is a diamond?
Diamond is a distinct variation of carbon atomic structure. Its internal atomic structure consists a variation of the face-centered cubic crystal structure defined as diamond lattice. Thus it’s a purely carbon product with minor or none impurities. However impurities infuse different colors to the diamond like Champaign brown diamond, black diamond and such of all kinds.

How a diamond is formed?
Perhaps diamonds are the oldest gemstone formed in nature. Natural diamonds are formed at high pressure and temperature at depths of 100 – 150 miles (or 150 – 225 kilometers) in the depth of earth’s mantle consuming millions year’s time span. Most diamonds are formed 1 billion to 4 billion years ago (initial stages of earth formation). Some diamonds were also created at depths of 200 miles (or 300 kilometers) at more pressure and temperature producing excellent diamonds.

Subsequently these diamonds are carried by deep-origin volcanic eruptions. The magma brings diamonds and other stones to upper layers of earth through volcanic pipe where diamonds are spread through magma in a wide area to dig by human kind.

What are material properties of a diamond?
Diamond is an isotope like a coal and graphite but doesn’t resemble their properties. Unlike these two elements, a diamond is a transparent mineral which’s ignition point is 720 – 800°C in oxygen and 850 – 1,000°C in air. Its density is 3.15 – 3.55 g/cm3. Interestingly diamond’s atomic bonding is weaker than atomic bonding in graphite but its three-dimensional lattice makes it stronger than graphite making it world’s hardest stone which can’t be stretched by other material except another diamond.

Natural diamonds are excellent electrical insulators but blue diamond which consist boron impurities are natural semiconductors due to boron’s electrical conductivity characteristics. Its surface is lipophilic and hydrophobic that means a diamond’s surface can’t be wet by water but can be wet easily by oil.

Diamond in human history
Alike zero, diamond is an invaluable gift from ancient India who identified first diamond in the world and began to mine it. According to available info, diamond was unearthed before 3,000 to 6,000 years by Indians at banks of Penner, Krishna and Godavari rivers. Besides it, Karnataka’s Golconda diamond mine was only source to hunt diamonds until nineteenth century before finding diamond mines in rest part of the world. World famous diamond Koh-i-nor (mountain of light 186 cts cut to 108.92 cts and now in the Tower of London) was also produced at Golconda mine.

It was gifted to Greeks, Arabs and other same time civilizations by Indians. The word diamond is also derived from the ancient Greek word αδάμας (adámas) which means unalterable, unbreakable or untamed. Today India does not own any major diamond mine but it is the largest hub of diamond cutting and polishing, even 11 diamonds out of 12 diamonds are processed in India.

Various uses of diamonds
Although diamond is first choice of jewelers and precious gemstone lovers, they are also loved by today’s industries. Diamonds have various industrial applications proving beneficial itself for mining industry. Mostly diamond is used in cutting and grinding tools. Diamond powder is used as abrasive. Scientists are also experimenting to utilize blue diamond to make highly advanced microchips in electronics.

Can a diamond be damaged or destroyed?
Certainly diamond is the hardest material found in nature but it can be destructed, damaged or stretched too. If it is not, a diamond converts into more stable carbon isotope graphite in a time span of thousand years that means if you buy a diamond today and keep it safely, it will serve your family for coming several thousand years.

The April Birthstone — Diamond
The royal gemstone diamond is a birthstone for the month of April thus it is worn to bring good luck to the stone wearers. Diamond also represents the planet of Venus in Indian astrology as well as it is a symbol of the Sun because of its brilliant features. Diamond is also used in medicines in Ayurveda to attain health benefits.