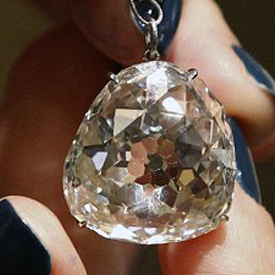 “As soon as she set eyes on the Beau Sancy diamond, Marie de Médicis, wife of the French king Henri IV, knew she wanted it, and she nagged her wayward husband until he bought it for her.”

And so began the Beau Sancy’s 400-year journey through European royal history as it passed between warring and peacemaking monarchs in France, England, the Dutch Republic and Prussia.

Nicholas Harlay de Sancy, diplomat, financier and ardent monarchist, is remembered as the owner of the 55.23-carat shield-shaped diamond, the Sancy, one of the most celebrated gems in history. Sancy also owned another sizeable and beautiful diamond whose existence was documented on January 31st, 1589 as follows:

“A great flawless diamond, facet cut, weight 37 to 38 carats or thereabouts, set in a golden frame and the end of which hangs a great round pearl, flawless and perfect, of about 20 carats; also a great heart-shaped ruby set in gold at the base of which hangs a great pear-shaped pearl, for the price of 20,000 ecus. The large jewels were pladged and put into the hands of the said Sieur de Sancy that he might pawn them in Switzerland, Germany or elsewhere with the charge that if they were pledged for less than 24,000 ecus. His Majesty will only pay the said Sancy the price for which they were pledged.”

This diamond came to be known as the ‘Beau Sancy’ or ‘Little Sancy’ and was destined to pursue a different course of history from Sancy’s larger diamond. The Beau Sancy is a colorless, rounded pear shape, cut with a total of 110 facets, including the two small table facets.

Both of Nicholas de Sancy’s diamonds came to be the subject of protracted negotiations with parties in Constantinople and the Duke of Mantua, a connoisseur and avid collector of fine gems. On October 10th, 1589, Sancy wrote to M. de la Brosse, who was acting on behalf of the Duke:

“One of my diamonds weighs 60 [old] carats. I want nothing less than 80,000 ecus for the big diamond and 60,000 for the smaller. If it pleases His Highness to take one or both of them, I will sell them to him, but I wish ready money, or most of it guaranteed, for the rest, in Venice or France, and wish no delay for the most shall not exceed three years.”

The negotiations with the Duke of Mantua continued well into 1604 and ultimately came to nothing. Instead, Sancy sold the large diamond to King James I of England. There remained the Beau Sancy which, in 1604, was bought for merely 25,000 ecus by Marie de Médicis, the consort of King Henry IV of France. In The French Crown Jewels, Bernard Morel suggests that it is a strong bet that the King himself paid for the diamond in order to assuage the feelings of indignation aroused in the Queen when she learned that Sancy had sold his bigger diamond to the King of England. The Beau Sancy was set in the top of the crown which Marie de Médicis wore at her coronation in 1610. It was to bring neither of them great pleasure. In 1610, a day after her coronation – for which the large pear-shaped gem was set atop her crown – Henri was assassinated, leaving six children under the age of nine.

After the murder of Henry IV in the same year, the Queen became Regent and devoted herself to affairs of state; she developed a passion for power which led to civil unrest in France and estrangement from her son, King Louis XIII. Marie de Médicis was exiled in disgrace to Compiégne, escaped to Brussels in 1631 and at Cologne in 1642, having intrigued in vain against Cardinal Richelieu, the statesman who is acknowledged as the architect of France’s greatness in the seventeenth century. She died in straitened financial circumstances which led to the sale of her possessions to pay her debts. The Beau Sancy was sold to Frederick Henry, Prince of Orange, for 80,000 florins. It is said that history never repeats itself but does sometimes produce curious parallels: in 1644, two years after the death of Marie de Médicis, her daughter, Queen Henrietta Maria, the wife of Charles I, King of England, was forced to pawn the Sancy’s large diamond so as to raise funds to support the Royalist cause in the Civil War in England.

Prince Frederick Henry (1584 – 1687), the son of William the Silent, the principal leader of the Dutch struggle for independence from Spain, achieved fame as a general and a politician. He was the first of his line to assume, as leader of the United Provinces of Holland, a semi-monarchical status and to determine both domestic and foreign policies. Until the age of 41 it was said of him that he was ‘too fond of women to tie himself permanently to one of them.’ He did eventually succumb, to endow the Hague in the seventeenth century with some semblance of baroque court life.

It was a grandson of Prince Frederick Henry who, in 1689, ascended the throne of England as William III. He inherited the Beau Sancy and gave it to his consort, Queen Mary II, as a wedding gift. The couple were childless so the diamond came into the possession of another grandson of the Prince of Orange, Frederick III, Elector Prince of Brandenburg, who, in 1701, became King of Prussia under the name of Frederick I. Valued at 300,000 Reichstalers, the Beau Sancy became the most important stone in the Crown Jewels of Prussia and was set in the royal crown. In an inventory of the crown jewels made in 1913 the diamond featured as the pendant to a necklace of 22 diamonds, part of a diamond suite which also included a large breast ornament, a pair of earrings and a fan.

On Tuesday the 34.98-carat jewel became the oldest diamond ever to go under the hammer at auction, selling for eight million francs (£5.3m) at Sotheby’s in Geneva, Switzerland. It was more than double the estimated top price. 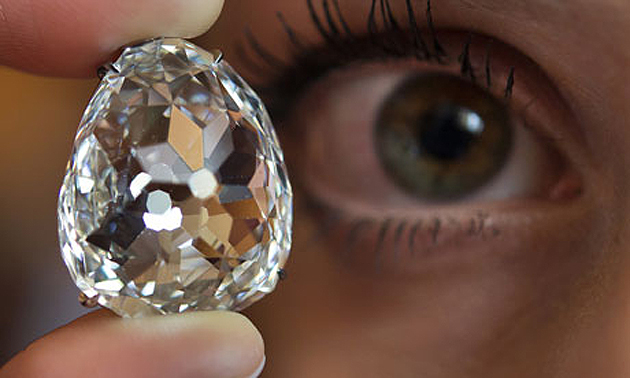