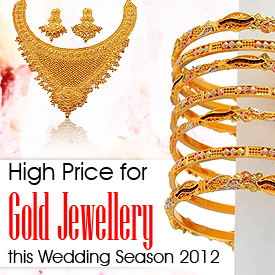 Remember the song, “sona sona baba sona sona baba sona sona sona” from Biwi No. 1? Since the last couple of days, everyone is humming Sona song for all the Biwis and brides this wedding season. This is due to the sudden spurt in gold price. Even though, the global scenario is way off peak, retailers in Mumbai and Bangalore sold 24 carat gold at over Rs 30,000 per 10 gram, including taxes.

One of the main factors of this price hike in Indian market is current status of Indian rupee. The rupee, whose value has been falling for the past few days due to weak economic data, depreciated on Monday by 19 paise to close at 52.73 against the dollar.

Another major factor is the increase in gold demand as this is the peak wedding season in India. According to the retailers and jewelers, this price is expected to remain till the wedding season concludes, i.e. by March 17th. As per the Jewelers in Mumbai, the demand of gold this season is not met by the supply and this shortage of supply is due to import duties.

The gold price was its all time high last year in Nov, with value of Rs 29,516 and on Monday, in the wholesome market, price had reached Rs 29,490 per 10 gram. This comparison has caused concern among the buyers.

On quoting the experts on the gold price scenario, bullion expert Vijay Bhambwani, chief executive officer, BSPLIndia.com said, “The demand for gold has gone up due to the wedding season and adding to this, the rupee is weakening. Consequently, the price of gold today touched its all- time high though in the overseas market, it is way off the mark,”.

Siddharth Mehta, chief strategist, Rajesh Exports, India’s biggest gold importer and exporter said, “In India, prices have hit the roof as taxes have made gold expensive compared to the previous peak. Besides, the weakening rupee is adding to the effect.”

A dealer on the condition of anonymity said, “People are scared to import gold as prices may crash. The levy of import duty has caused concern among speculators”