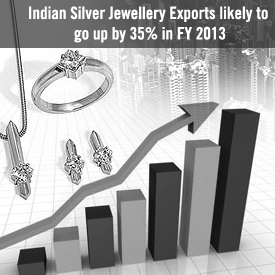 The affordable white metal is back in the market with an impact, owing to price hike of gold item around the globe. The word silver originated from Anglo-Saxon Seolfor or siolfur; meaning ‘silver’, and Latin argentum meaning ‘silver’.

Prior to the 18th Century, silver was found primarily in the homes of the nobles or in the possession of churches and temples in the form of chalices, crosses and altar appointments. At that time, most silversmiths were subsidized by either one of the royal households or by some local Bishop. The new wealthy middle-class permitted a number of silversmiths to support themselves as independent craftsman. In the early 1700’s, the social revolution and the economic development on which it was based, made the silver craftsman an important man in his town.

The word “sterling” has been used to mean high-quality silver since the 1200’s. At that time, the coins of England had decreased in value and contained only a little silver. The only European coins that contained large proportions of silver, were those made by the merchants of the Hanseatic League, a group of trading cities in Northern Germany. These coins were called “Easterlings” to distinguish them from the low-silver alloy coins of England. English speech contracted “Easterling” to “Sterling”.

Sterling is the most hygienic metal known to man. It has actual germ killing properties. It is also the most durable art form and the most economical purchase that can be made for the home. Sterling silver grows more beautiful with the passing years, never wears out, and can be passed along as part of a heritage that grows stronger with passing generations.

Presently, with the gold price reaching new heights and slowdown pressures, the world, specially the US and Europe prefer more of silver jewellery. Rajiv Jain, chairman of the Gems and Jewellery Export Promotion Council (GJEPC), “The exports are likely to go up by 35% in FY 2013”.

A new class of buyers has emerged in the West who will invest less that $100 (Rs 5,200) in jewellery. Due to this class, during 2011-12, Indian silver jewellery exports grew to 44% compared with gold jewellery export growth of 30%. Rajiv Jain added, “The new class is emerging fast and growing stronger. Consumers in overseas markets are buying more of silver jewellery worth less than $100 than investing in gold jewellery, which is out of their reach due to slowdown pressures and rising gold prices.”

The Silver jewellery exports for FY12 stood at Rs 3,681 Crore against Rs 2,567 Crore in FY11. The Gold strike in March turned out to be a blessing for the Silver market. When gold jewellers were on strike for 21 days against government’s import duty, silver exporters shipped Rs 561-crore worth jewellery compared with Rs 366 Crore in March 2011. The demand for silver is expected to go up in India as well. India’s silver imports may come down between 3,500 tonne and 4,000 tonne from last year’s 4,800 tonne.

Bullion traders in India hope that the prices may touch an all-time high of 1Lakh per kg by the end of this year, if the positive suit follows. According to Ketan Shroff, managing director of Pushpak Bullions,” The trend is fast picking up. Investors and jewellery lovers prefer more of silver jewellery as gold prices go up consistently. If the positive sentiments can keep up the pace, silver prices may go over Rs 1 lakh, beating last year’s Rs 75,000 levels.”

With Silver back in the market, we at Johareez are hosting a homecoming party by launching new silver products. Earrings, rings, pendants, Jewellery Sets, bracelets, anklets, bangles and even silver coins crown our jewellery collection. New designs in silver with gemstones, diamond, gold, pearl, enamel et cetera awaits you in the beautiful world of Johareez.