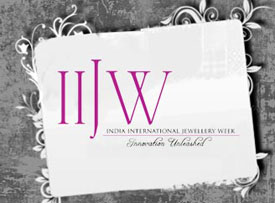 Indian Gems and Jewellery Industry got more strengthen in Asia and in rest of the world with the grand opening of the second edition of the India International Jewellery (IIJW) Week 2011 on 31st August 2011. In Aisa it is the first jewellery week of its kind and is organised by the Gem and Jewellery Promotion Council (GJEPC).

The Chairman of GJEPC Rajiv Jain says, “This year, we will be graced by the presence of Fabrice Martelli of Boucheron & Yasmina Khoudja of Harry Winston who will be a part of our esteemed guest list. IIJW is a milestone event set to establish Brand India as the as THE “Jewellery Design Destination” for Asia and the rest of the world.”

IIJW is considered as a great platform which provides recognition to India’s heritage of complicate and delicate jewellery of yesteryears. Moreover the evolution in designs done on IIJW is the blend of classic sensibilities of the past with the more recent and fashionable approach. This year it will display large number of design houses that is the most talented 35 designers who will introduce global design trends for the current season. Mr. Jain says, “For the Indian gem and jewellery industry this is history in the making”.

Shri Subodh Kant Sahai, Minister of State for Tourism said “Jewellery has been one of the many fascinating attractions for foreigners visiting India, besides the myriad tourist spots that our country offers. I am happy to announce the celebration of India as the global destination for jewellery design at the India International Jewellery Week 2011 which is poised to take the country to greater heights of recognition as a country which is the largest manufacturer and supplier of diamonds in the world, and at the same time one that forecasts trends in Jewellery designs for the International markets.”

One more celebration awaits IIFW because of the huge achievement of India being established as a world leader and largest exporter and fastest manufacturer too. An official of De Beers, who did not wish to be named, said first-half sales rose 33% to a record as demand in India and China drove up prices.

Domestic players like Titan Industries, too, have reported encouraging sales. The company owns the Tanishq jewellery brand which reported 62.5% jump in sales year-on-year to $463.65 million, during its first fiscal quarter of 2012 that ended on June 30, 2011. Net profit grew 76.4% to $32.46 million.

The week long show will held for 5 days out of which four days will showcase collections from designers and design houses, and the 5th day will host a grand finale of the best from all participants at IIJW.