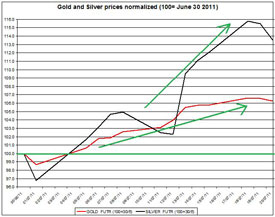 Gold has been widely used throughout the world as a vehicle for monetary exchange or in the form of investment to hedge against inflation or in the form of jewellery. All these factors are the reasons for hyping gold demand day by day. Seems like this non stop demanding nature of gold will lead it to its boom where it would be like a dream for a common man to purchase it.

According to a new research conducted by the World Gold Council (WGC), the demand for gold in India would be driven by rapid GDP growth, urbanization and rise in income and savings levels of the consumer. The gold purchasing would increase by almost three per cent per annum over the next decade.

This definitely would results its price to roar in the upcoming time. Currently the price of gold reaching an all-time high of $1246 per ounce!

The current rate of gold and silver in metropolitan cities are as follows:-

A report by Deutsche Bank points out that gold price has now increased for 124 consecutive months.

Now the question for which all want an answer is that what will be the price of gold on December 31, 2011. Well the future cannot be sure; it’s always an assumption or an estimation which can be made on behalf of future.

As per Jeff Clark of Casey Research, one of the premier precious metal analysts in the world, in every year since 2001, gold has gone higher from the lowest price it hit in the months of June, July and August, by the end of the year.

The average gain in price of gold between the lowest price in the months of June, July and August and the highest price it touched in the remaining months of the year has been 20.7%.

“From this, we can make some projections. If gold were to match the average 20.7% rise from our July 1 low (assuming that low holds), we would hit $1,790 per ounce this fall, probably in November or December,” writes Clark.

As we all know gold prices have peaked normally in November or December.

The Casey research told that the price of gold on December 30 (the last trading day of the year) would be $1, 729. This year the average gains are supposed to be exceeded, as per Clark. “In fact, given that there’s no end in sight to the sovereign debt issues here and abroad (regardless of the resolution to the US debt talks), I’d bet the average gains are exceeded. If gold matches the greatest fall and year-end increases, we’d see $1,980 per ounce and $1,925 per ounce, respectively,” he says.

This simply means a gain of approximately 19% from current gold price. Hence it is proved that in near future the price of gold would definitely going to increase.

Now what is the trend of increase in the price of silver?

For this Paul Curtin owner of Raymond’s Jewelers says,”I just had a gentleman call me this morning, he’s been investing in it and he placed an order for 10 ounces of gold bars and 10, 10 ounce bars of silver, so 100 ounces of silver and 10 ounces of gold, that was a $22,000 dollar order.”

“Silver’s gone up, but it’s still very affordable. I just came back from a jewelry convention and that’s what they’re pushing–silver is the new gold because of the price,” Curtin said.

He told that he could possibly have $2,000 by Christmas, the way things are going.

All this data shows that till December it’s almost sure that the price of gold and silver would increase. Gold would become out of reach of people and hence the concentration would move towards silver which in turn will rename it as new gold.