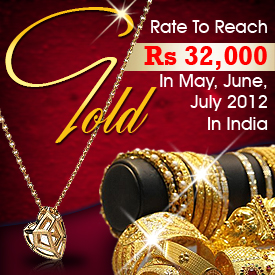 Indian rupee has weakened against dollar, with the current price of Rs 53.1 for $1. This has in return affected the Indian rupee resulting in its all time high value of Rs 29,690 per 10 gm. The speculated gold price for the next 2 months is Rs 32,000 per 10 gm.

On Akshaya Tritiya festival this year, one of the largest gold buying festivals in India, the jewellers across the country witnessed lower-than-expected sales. As per the experts, the gold imports of India for April has come down to a one-third at 30-32 tonne against 90-92 tonne last year same period. The bullion dealers believe that it could go even down in May. “The prices should stabilize soon, else the imports could falter further in May to less than 30 tonne against 98-100 tonne in the last corresponding period,” says Prithviraj Kothari, president of the Bombay Bullion Association.

However, the bullion dealers are hopeful of significant consumer buying in the coming two months as it would be the major marriage season in India. As gold plays an important part in Indian weddings traditionally, the upcoming marriage season in India is prompting consumers to rush for the yellow precious metal. “An average consumer is buying minimum 30-35 gm gold for marriage. It may go up to maximum of 500 gm,” says Girish Choksi, an Ahmedabad-based bullion dealer.

“If the rupee continues to fall against dollar, the prices of gold in spot market will go higher. It may touch Rs 31,000-32,000 mark very soon,” added Prithviraj Kothari. The relief in gold price is related a lot with US economic figures. “The US GDP figures are not that great. There are a few ups and downs expected in the coming weeks and, therefore, consumers are buying on every dip,” says T Gnanasekhar, director of Comtrendz. “Lot of new positions has been created in commexes on Tuesday after traders noticed sharp rise. The momentum is likely to be continued with a back-up of dollar appreciation,” says Badruddin Khan, AVP-research, Angel Broking & Commodities.

India imported 933 tonne for 2011 and is expected to import much lesser this year. “The prices should stabilize soon, else the imports could falter further in May to less than 30 tonne against 98-100 tonne in the last corresponding period,” added Kothari.

However, gold jewellery accounted for over 500 tonne and the investment demand recorded at 366 tonne.