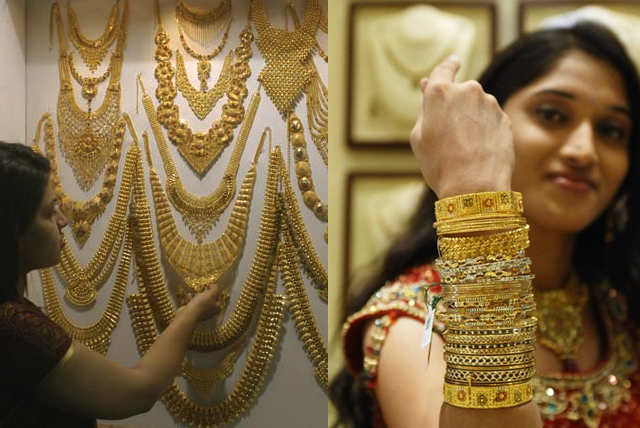 There were times when Gold was not all about glitters and 10gms of it could be bought in 11,000 INR. Time transformed and tables turned; now gold prices have skyrocketed till 32,000 INR. No wonder that gold is glittering like no other metal, gemstone or jewellery is.

Have a look at some astonishing facts and transformation gold prices have undergone:

Albanian Minerals predicts that Indian consumption of gold may climb to 1010 metric tons in 2012.

These few facts might indicate what exactly not the reality is telling. By scanning these facts one might come to the conclusion that these skyrocketing prices of gold might have affected the buying patterns and behavior of gold and gold jewellery buyers. The festive season which has begun with Ganesh Chaturthi is bringing flurry of festivals and poojas across the nation. But to the contrary, these prices have affected nothing and this coming festive season is expected to be as flourishing as it ever was or have been. The only difference in buying patterns might have erupted from middle class is buying less amount of gold in their budgeted target.

Many jewelers and jewellery brands are witnessing the stagnant demand regardless of the fact that prices are touching skies. Sourabh Gadgil of PN Gadgil Jewelers says, “Even with the increase in price we did not face an influx of people coming to sell gold ornaments. With the advent of festive and marriage seasons, customers are all lining up to buy gold. The demand has increased but there is less gold available in the market.”

A gold buyer expressed her mind on these rising prices of gold, “I need to purchase at least 50 grams of gold for each of my daughters to give them at the time of their marriage. At the current rate of gold prices, we cannot even think about it.”

Another Jeweler also states, “Customers who spend less are buying light- weight gold ornaments. For instance, if a person bought 10 gm gold for Rs 15,000 a few years ago, now he is purchasing only 5 gm for the same amount.”

Another gold jewellery buyer who has to get his daughter hitched states, “No matter what the price is, we have to perform the marriage of our daughters. Even if it means taking loans from others, we have to purchase gold for their weddings.”

Besides that government duty for importing gold in India has been increased from 1% to 2% which now shot to 4% has surely affected gold and gold jewellery buying pattern to some extent but still the hope is alive and all gold markets have kept their eagle eyes with their breaths with held for the upcoming festive season. The high demand and lesser supply is causing all the sellers to import the gold which would be an additional burden due to this import duty for gold.

The best thing about this is that festive season is the only reason why gold demand is constant even after the price has skyrocketed. As in Indian culture, a girl needs to be bombarded with tons of gold to prove their social and economical status while wedding. Evil practice of Indian society dowry is still prevalent in India.

Bullions and market experts are predicting further more bounces and boosts in gold rates. But one thing is for sure that gold markets will sour and flourish this festive season and gold will keep its glow & glitter.