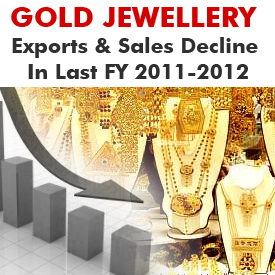 Indian Gem and Jewellery Industry have been under pressure in FY 2011-2012. A marginal decline of 0.36% in the period has been witnessed due to the decrease in trading exports of diamonds. Retail jewellery took a hit after Akshaya Tritiya due to the decreasing rupee against dollar.

• UAE was the largest exporting destination with 44% of Exports to the market, followed by Hong Kong with 25% and USA with 12% of exports.

Mr. Rajiv Jain, Chairman, GJEPC said,” We are happy that keeping with the govt. objective of reducing the trade deficit, imports of cut and polished diamonds have dipped post the introduction of 2% import duty on cut & polished diamonds in mid-January 2012. However an increase in import figures of rough diamonds indicates stable growth of trade at the manufacturing level and growth in exports.” “We can note the trend in the 1st quarter of April-June 2012. This trend is positive and will help achieve higher value addition and maintain trade balance in months to come”, he added.

During January to March 2012 Import of polished diamonds showed a substantial decline of more than 70% in a month post introduction of 2% duty on C&PD. There is a decline of 30% in FY 2011-12 as compared to the previous year, in the annual figure. It is expected that the total import of polished diamonds at US$14.3 bn in 2011-12 may eventually come down significantly in 2012-13.

In absence of a strong buying reason, overall sales of diamond and gold jewellery has remained subdued. After Akshaya Tritiya, the industry struck work for 21 days which resulted in loss of business worth Rs 20,000 Crore. The reason behind the lack of enthusiasm in jewellery industry can be explained in two factors,

• Gold prices declined by 17.5 per cent from its highest level of $1,920 an oz in February this year to $1,680 an oz now. However, this correction has not translated into the Indian market due to a weak rupee. Since, the rupee has depreciated by 9 per cent over the period; a marginal decline of 3.5 per cent in gold’s rupee value has failed to encourage customers to invest in the yellow metal. Customers are awaiting measures by the banking sector regulator, Reserve Bank of India, which would result in a decline in gold prices in rupee terms. Since February, the rupee has depreciated from 49 to over 53 against the dollar.

• Indian customers take a break after Akshaya Tritiya. However, due to weddings or muhurrat season, they are forced to come back to the market. This year, there was no such reason. Hence, the overall buying sentiment remained dull, said Bachhraj Bamalwa, chairman of the apex domestic trade body, the All India Gems & Jewellery Trade Federation. The next wedding season would begin in November. However, demand may resurge around the time of Diwali and jewellers would have to be patient till then.

Rajiv Jain, chairman of the Gems & Jewellery Export Promotion Council, said fall in domestic jewellery sales in the past three weeks was lowest in a decade. “Rural sales may turn around soon, with the staggering growth in agri output this year. This is a major sign of relief for a recovery in jewellery sales in the near future,” he said.