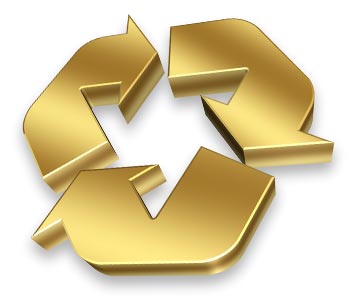 All that glitter is not gold but gold has its own glittering graces. Gold is one of the most precious metals and riding high with sky rocketing hike in prices. With its record breaking price hike in India where rupees is suffering a lot when compared with dollar, gold is getting heavy on pockets. But India is the place where weddings are extravaganza and weddings would be the sole reason why gold will never go down and would keep glorifying irrespective of its constantly rising prices. But this beautiful metal also has its dark history which is still tracing it. While picking this glittering shiny metal, no one ever thought about its dark secret of the harmful gold mining. Yes! That 18k of your gold jewelry has emitted 20 tons of cyanide and ore based waste.

To top this catastrophe some gold miners are using ‘Pit Mining’ methods to mine gold and this method needs to excavate and blast gigantic holes into Earth’s outer layer which means Less than 10 grams (5/100ths) of an ounce of gold per ton of rock. According to Environmental Protection Agency, nothing can add up to the even half of the gold mining pollution.  This problem needed the urgent rise of some sort of regulation and there arose the recycling of gold and gold jewelry.

The world’s largest open pit mine is the Bingham Canyon mine in Utah. Visible to astronauts from outer space, it measures 1 mile deep and 2.5 miles across.

Selling the melted and rebuilt gold and gold jewelry objects can reduce the practice of harmful gold mining.

Metals mining employ just 0.09 percent of the global workforce but consumes up to 10 percent of global energy production.

Approximately half the gold produced worldwide has or will come from the lands of indigenous peoples from 1995 to 2015.

Metal mining is the biggest polluting factor in United States.

Only about 15% gold consumption is recycled every year.

120,000 tons of toxic waste spilled from the Baia Mare gold mine in Romania in 2000 and it polluted drinking water of 2.5 million people and killed 1,200 tons of fish.

After the mining, approx 63 percent is used in jewelry (which includes art), 21 percent as coins, 15 percent in some kind of industrial use including electronics, and the other 1 percent in dental (Amey, 2005).

Sometimes handling, accountability, and security in the generation, collection, and distribution of the recycling made it so cumbersome that other particles than gold like gloves or electronic metals into electronics were also recycled.

Many items like wedding rings have been created from recycled computers where gold has been picked from motherboards of PCs.