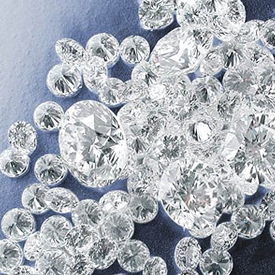 Diamond, New Gold, As A Global Investment Commodity In 2012

Every diamond is a one of a kind gem. It relates to immense pride and joy to own one fine piece. Its beauty and elegance justifies its value. The huge demand and importance of diamond in the society has triggered a small number of investment gurus to compete behind the scenes to turn diamond into a commodity that could be invested in like gold traded through funds on exchanges.

The first diamond backed exchange-traded fund, available to anyone with an online trading account is being reviewed by The Securities and Exchange Commission. It would buy one-carat diamonds and store them in a vault in Antwerp, Belgium, providing daily values with an as-yet-unnamed index. The fund is backed by a New York company, IndexIQ, which has brought 14 other exchange-traded funds to market in the last five years.

Martin Rapaport, who founded a popular gauge of diamond pricing, said recently that he was preparing to release a “few” products, declining to describe them, this year that would be available to retail investors.

Global giants like Harry Winston and De beers are drafting their own investment plans. Harry Winston is working with a Swiss asset manager to create a $250 million fund that is set to begin buying half-carat to six-carat diamonds this year with money from institutional investors like hedge funds and pensions. The fund would own diamonds bought and sold in Harry Winston stores and sell shares to private investors.

Edahn Golan, the editor in chief of IDEX Online, a provider of diamond industry data said, “Diamond is the last uncommoditized commodity, and so it’s drawing in many organizations. I assume that by the end of this year there will be a bunch of them out.”

Matt Zeman, a commodity trader at Kingsview Financial said, “There would be a huge learning curve for me to be comfortable trading something like this.”

The idea of diamond as an investment long repelled many investment professionals because of the 80 percent to 90 percent market share of production held by De Beers, the global diamond giant. That began to ebb when De Beers relaxed its grip on the supply channels in 2000, and subsequently sold some of its mines and inventory, reducing its market share to 40 percent today, according to Citi

Peter Laib, chairman of the Swiss firm Diamond Asset Advisors, which is working with Harry Winston on a diamond fund said, “Before De Beers gave up its monopoly, the investment case was pretty difficult. Why would I start a fund where the price is controlled by one company?”

The allure of diamonds is that, like gold, they are easily authenticated and long lasting. But unlike gold, and oil, diamonds have not had much price volatility, in part because they have not been touched by large flows of speculative money, though that could change if the new efforts succeed. However if the figures be seen, according to Citigroup analysts, annual production for gold is around $100 billion. By comparison, the annual production of polished diamonds is about $18 billion.

Gold is sold for essentially the same price in financial markets around the globe. However there is a lack of uniform standards for diamond pricing. Diamonds have been sold mostly through bazaarlike areas like the Manhattan district and the Antwerp Diamond Bourse, which advertises that a “binding handclasp fixes price, delivery and conditions.” Some participants even argue that diamonds are not a commodity but unique items that need to be evaluated individually.

However, Wyndham, Rapaport and IDEX are competing to prove that wrong by creating standardized pricing. IDEX has an hourly updated index of asking prices from its online database, weighted with the 15 most popular varieties. According to Mr. Wyndham, “The IDEX index is not the best gauge because it relies on asking prices rather than actual transaction prices, as stock exchanges do. Polished Prices hosted a conference in 2007 with dozens of finance industry professionals who considered how to make diamonds a regulated investment. Mr. Wyndham’s partner, Richard Platt, said he thought then that a product would be available sooner. “It’s been difficult, but we’re quite a long way down the road to getting there,” Mr. Platt said.

All the new sponsors make the same argument for what makes diamonds attractive to investors: while the supply of new diamonds is not expected to rise, the demand from India and China is expected to increase steadily. Brian Chen, a mining analyst at Citigroup, said “the fundamentals look so good in terms of supply and demand.”

With the giants like Harry Winston and De Beers and major European financial institutions competing to make diamond follow the gold path, it seems the day won’t be far when we can invest in diamond along with gold. But it should be handled with caution until we know how exactly it works.