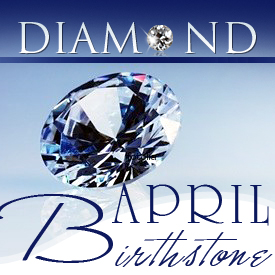 She who from April dates her years. Diamonds shall wear - lest bitter tears For vain repentance flow.

A blend of infinite power and exquisite beauty is not only dangerous but exceptionally appealing and hence forever. Fascinatingly, the April birthstone, Diamond, spells forever all over it. Everything about it confirms its superiority, such as its Royal presence throughout history, rare existence and dominance as the hardest substance on earth.

The creation of this rather simple composition requires idealistic conditions. The intense heat and pressure required for this crystallized carbon are found deep within the earth. It was brought on the surface of the earth in its crude form by volcanic activities centuries ago. Diamond settled as either volcanic rocks or washed away into rivers. The first river-bed (alluvial) diamonds were probably discovered in India, in around 800 B.C. Although explorers and scientists have discovered some deposits on most continents, commercial quality and quantities are found in only a few places primarily in Australia, Botswana, Russia and South Africa.

In its raw state, diamond can pass as a plain pebble on the beach. Considered as taboo anciently, the cutting and polishing of diamond is believed to be originated in Europe. The earliest reference to diamond cutting is in l550 in Antwerp. The European travelers visiting India for its diamond treasures used to transport diamonds from the India Mine to Europe for cutting. After realizing that only diamond can cut diamond, a wooden table covered with diamond dust was used to achieve polishing. And so the first Rose Cut, resembling a rose bud, came into existence in the 16th century, and was widely used through the 18th century. With the advancement in gemology in the present century, value and merit of diamond is decided by its cut, polish and clarity.

Diamond had its significance and symbolism even in different pre medieval cultures. The ancient Greeks believed that diamonds were splinters of stars fallen to earth. It was even said by some that they were the tears of the Gods or perhaps crystallized lightning or hardened dew drops. As a synonym of Lightening, owing to its invincible strength and sparkling nature, Ancient Hindus called it “Vajra”.

In the Fairytale Era, diamonds were reserved for royalty, in crowns, swords, emblems, and jewelry – the only people “entitled” to their symbolism of strength, courage and invincibility. But in 1477, Archduke Maximillian of Austria gave a diamond ring to Mary of Burgundy and before long the tradition of diamond engagement rings was one embraced by even the most humble brides-to-be and their suitors.

Early Egyptians believed the vena amoris (vein of love) ran directly from the heart to the top of the third finger and so, a woman wears her diamond on the third finger of her left hand. Legend has it that Cupid’s arrows were tipped in diamonds and over the centuries, this magnificent gemstone has acquired a well-deserved reputation as the ultimate gift of love. There is no more convincing a promise of an enduring relationship than the brilliant gemstone that has endured in people’s hearts and so it is crowned as the anniversary gem for the 10th and 60th years of marriage when eternity bands and other diamond-detailed rings replace original wedding bands. Diamond is synonymous of everlasting love, endured in people’s hearts throughout history and till eternity.

This Love potion can heal many diseases and shape up metals as well. The gemstone has long been credited for having certain medicinal properties and is used to cure health problems related to brain diseases, pituitary glands. It is also used to draw out toxins and therefore is used as a remedy for poison. In the Industrial world, diamond has historically been associated with their hardness; this property makes diamond the ideal material for cutting and grinding tools used to polish, cut, or wear away any material, including other diamonds.

Astrologically, diamond, assigned to Aries, is believed to conduct the energies of the planet Mars with which it is sympathetic and that wearing jewelry containing the gemstone will focus the energies of the planet and sign through the gem. The gemstone is believed to influence both positive (Loyal, Courageous, Adventurous, Passionate) and negative (Boastful, Intolerant, Selfish, Impulsive) personality traits and characteristics of those born under the astrological sign of Aries. It is believed to enhance relationships, increase inner strength and also provide balance, clarity and abundance to the bearer.

The diamond’s white hue signifies life, joy and innocence. But diamonds may be nearly any color in the rainbow plus a wide range of browns, grays, and white. Shades of yellow are most common, followed by colorless. Blue, black, reddish, and greenish are more valuable (some extremely so).

To match the exquisite beauty of a diamond, the jewelry should also be equally tasteful. With this in mind, we at Johareez.com present you a range of enticing designs from the Victorian era to the modern chic experiments. Create your own style statement with your favorite and lucky charm, the diamond. These unique designs include world class art, such as, Greek, Gothic, Neogothic, Catalan, Mogul, Rajputana, Bollywood even your favorite Cinderella and Princess jewels. And if you are an Aries, you need no reason to justify your purchase. Treasure the diamond as you treasure yourself or your love.