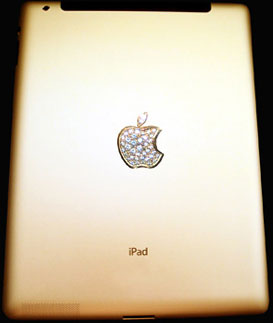 Apple has launched the latest version of ipad i.e. ipad 2 gold history edition which cannot be exactly described as the sequel of the ipad.

As evident, the apple products are famous for their uniqueness. Now, the uniqueness of ipad 2 lies in its sleek design and the price. Stuart Hughes unrivalled craftsmanship has made the world’s most unique gadget ever showing a blend of beauty, tech and history.

The tablet is encrusted with 53, 12.5 cts diamonds embedded in the apple logo which makes it dazzles like a tiny bulb. The Rear section of the tablet is made from 24ct gold apparently weighing an immense 2,000 grams.

The Magnificence of the gadget lies in its main front frame which is craved from the oldest rock in the world in the form of Ammolite, sourced from Canada. This rock is over 75 million years old.

In addition, to make the masterpiece still distinct sections of 65 million years old T-Rex thigh bone was splintered and then shaved into Ammolite and finished off with the unique jewels.

Adding more, the home button is made up of an 8.5ct flawless diamond which is surrounded by platinum and 12 outer diamonds screaming of the detailing by Stuart.

If there happens to be any millionaire gadget fans reading out this article, this can be perfect tablet priced at around 5 million Euros that makes it over $ 8 million and only two of such will ever be made…..