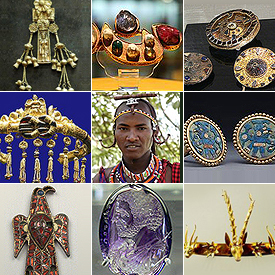 Today there are various patterns and trends in jewellery.

Each brand, each country, each culture has its own exclusive touch to the basic jewellery, making them exceptionally beautiful and unique.

Most cultures have at some point had a practice of keeping large amounts of wealth stored in the form of jewellery.

Numerous cultures move wedding dowries in the form of jewellery or create jewellery as a means to store or display coins.

Alternatively, jewellery has been used as a currency or trade good; an example being the use of slave beads. 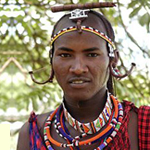 The first jewellery originated in Africa. Dating to 75000 years ago perforated beads made from snail shells are found at Blombos Cave. In Kenya, at Enkapune Ya Muto, beads made from perforated ostrich egg shells have been dated to more than 40,000 years ago. The Cro-Magnons had crude necklaces and bracelets of bone, teeth, berries, and stone hung on pieces of string or animal sinews. Shell or mother-of-pearl was also used in some cases. In southern Russia, carved bracelets made of mammoth tusk have been found. The Venus of Hohle Fels features a perforation at the top, showing that it was intended to be worn as a pendant.

Around 7,000 years ago, the first sign of copper jewellery was seen. 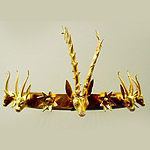 The Egyptians preferred the luxury, rarity, and workability of gold over other metals.

Jewellery originated in Egypt around 3000-5000 years ago. 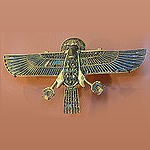 Egyptian Primitive Jewellery Around The World

For them jewellery was the symbol of power and religious power of the community.

Apart from being worn b wealthy Egyptians in life, it was also worn by them in death, with jewellery commonly placed among grave goods.

Color of jewellery had significance. For example, green symbolized fertility. Egyptian designs were most common in Phoenician jewellery.

Also, ancient Turkish designs found in Persian jewellery suggest that trade between the Middle East and Europe was not uncommon. Women wore elaborate gold and silver pieces that were used in ceremonies.

(I) Mesopotamia: Jewellery making became a significant craft in Sumer and Akkad, around 4000 years ago. Jewellery in Mesopotamia tended to be manufactured from thin metal leaf and was set with large numbers of brightly-colored stones (chiefly agate, lapis, carnelian, and jasper). Favored shapes included leaves, spirals, cones, and bunches of grapes. Jewellers created works both for human use and for adorning statues and idols. They employed a wide variety of sophisticated metalworking techniques, such as cloisonné, engraving, fine granulation, and filigree. 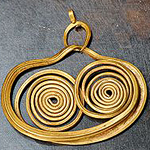 (II) Greece: The Greeks started using gold and gems in jewellery in 1600 BC, although beads shaped as shells and animals were produced widely in earlier times. By 300 BC, the Greeks had mastered making colored jewellery and using amethysts, pearl, and emeralds. Also, the first signs of cameos appeared, with the Greeks creating them from Indian Sardonyx, a striped brown pink and cream agate stone. Greek jewellery was often simpler than in other cultures, with simple designs and workmanship.

They worked two styles of pieces: cast pieces and pieces hammered out of sheet metal. 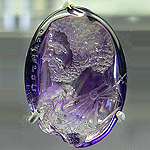 (III) Rome: when the Romans conquered most of Europe, jewellery was changed as smaller factions developed the Roman designs. The most common artifact of early Rome was the brooch, which was used to secure clothing together. The Romans used a diverse range of materials for their jewellery from their extensive resources across the continent. Although they used gold, they sometimes used bronze or bone, and in earlier times, glass beads & pearl. As early as 2,000 years ago, they imported Sri Lankan sapphires and Indian diamonds and used emeralds and amber in their jewellery. In Roman-ruled England, fossilized wood called jet from Northern England was often carved into pieces of jewellery. The early Italians worked in crude gold and created clasps, necklaces, earrings, and bracelets. They also produced larger pendants that could be filled with perfume. 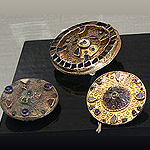 (IV) Middle Ages: The Celts and Merovingians in particular are noted for their jewellery, which in terms of quality matched or exceeded that of Byzantium. Clothing fasteners, amulets, and, to a lesser extent, signet rings, are the most common artifacts known to us. A particularly striking Celtic example is the Tara Brooch. The Torc was common throughout Europe as a symbol of status and power. The Celts specialized in continuous patterns and designs, while Merovingian designs are best known for stylized animal figures. Byzantium used light-weight gold leaf rather than solid gold, and more emphasis was placed on stones and gems. Like other contemporary cultures, jewellery was commonly buried with its owner. 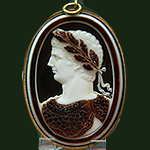 (V) Renaissance: The Renaissance and exploration both had significant impacts on the development of jewellery in Europe. A fascinating example of this is the Cheapside Hoard, the stock of a jeweller hidden in London during the Commonwealth period and not found again until 1912. It contained Colombian emerald, topaz, amazonite from Brazil, spinel, iolite, and chrysoberyl from Sri Lanka, ruby from India, Afghan lapis lazuli, Persian turquoise, Red Sea peridot, as well as Bohemian and Hungarian opal, garnet, and amethyst. Large stones were frequently set in box-bezels on enameled rings. Notable among merchants of the period was Jean-Baptiste Tavernier, who brought the precursor stone of the Hope Diamond to France in the 1660s.

Under Napoleon’s rule, jewellers introduced parures, suites of matching jewellery, such as a diamond tiara, diamond earrings, diamond rings, a diamond brooch, and a diamond necklace. 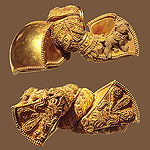 In Asia, the Indian subcontinent has the longest continuous legacy of jewellery making anywhere, with a history of over 5,000 years. One of the first to start jewellery making were the peoples of the Indus Valley Civilization in what is now predominately modern-day Pakistan. Early jewellery making in China started around the same period, but it became widespread with the spread of Buddhism around 2,000 years ago. The Chinese used silver in their jewellery more than gold. Blue kingfisher feathers were tied onto early Chinese jewellery and later, blue gems and glass were incorporated into designs. However, jade was preferred over any other stone. The Chinese revered jade because of the human-like qualities they assigned to it, such as its hardness, durability, and beauty.

India was the first country to mine diamonds, with some mines dating back to 296 BC. By 1500 BC, the peoples of the Indus Valley were creating gold earrings and necklaces, bead necklaces, and metallic bangles. Jewellery in the Indus Valley was worn predominantly by females, who wore numerous clay or shell bracelets on their wrists. Other pieces that women frequently wore were thin bands of gold that would be worn on the forehead, earrings, primitive brooches, chokers, and gold rings. Although women wore jewellery the most, some men in the Indus Valley wore beads. Navaratna (nine gems) is a powerful jewel frequently worn by a Maharaja. It is an amulet, which comprises diamond, pearl, ruby, sapphire, emerald, topaz, cat’s eye, coral, and hyacinth (red zircon). Each of these stones is associated with a celestial deity, represented the totality of the Hindu universe when all nine gems are together. The diamond is the most powerful gem among the nine stones. 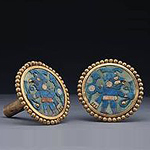 North and South America Ancient & Primitive Jewellery Around The World

Jewellery making developed in the Americas 5,000 years ago in Central and South America. Jewellery was sophisticated in their design, and feature inlays of turquoise, mother of pearl, spondylus shell, and amethyst. The nose and ear ornaments, chest plates, small containers and whistles are considered masterpieces of ancient Peruvian culture. Gold jewellery was most common in the Aztec Empire and was often decorated with feathers from Quetzal birds and others. The Maya were making jewellery from jade, gold, silver, bronze, and copper. Maya designs were similar to those of the Aztecs, with lavish headdresses and jewellery. The Maya also traded in precious gems.

In North America, Native Americans used shells, wood, turquoise, and soapstone. The turquoise was used in necklaces and to be placed in earrings. Native Americans with access to oyster shells, often located in only one location in America, traded the shells with other tribes, showing the great importance of the body adornment trade in Northern America.

Early Pacific jewellery was made of bone, wood, and other natural materials, and thus has not survived. Most Pacific jewellery is worn above the waist, with headdresses, necklaces, hair pins, and arm and waist belts being the most common pieces. Jewellery in the Pacific, with the exception of Australia, is worn to be a symbol of either fertility or power. Elaborate headdresses are worn by many Pacific cultures and some, such as the inhabitants of Papua New Guinea, wear certain headdresses once they have killed an enemy. Tribesman may wear boar bones through their noses.