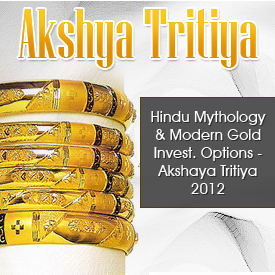 Every newspaper today, every social media and blogging site, gold advertisements on Television will highlight how important today is for most of the Indians. Every good deed is planned for today for months such as buying gold, houses, vehicles and other important investments so that it is fruitful. Yes, today is Akshay Tritiya, the most auspicious day as per the Hindu Calendar. Akshaya Tritiya has deep roots in Hindu Mythology, in not one, but many stories.

Also known as Akha Teej, this day is celebrated as the birthday of Lord Parasurama, the sixth incarnation of Lord Vishnu. However, apart from this there are other myths around Akshaya Tritiya. The day also marks the beginning of the “SatyaYug” or the Golden Age, which is the first of the four Hindu Yugas. The great epic Mahabharata was written from this day by Veda Vyasa along with Ganesha, as per a story in Puranas. The river Ganges, or Mother Ganges, or Ganga Devi also descended on Earth on this very day. The Popular Legend of Lord Krishna and Sudama associated Akshaya Tritiya with material gains and wealth acquisition. It is also believed that people born on this day shine bright in their life. Some of the notable names who were born on Akshaya Tritiya are, Basaveshwara, Ramanujacharya, Adi Shankaracharya, Swami Chinmayananda and Lord Buddha.

These important events made this day a momentous occasion in the Hindu Calendar and hence buying Gold on Akshaya Tritiya became inevitable. To make this day more customer friendly, investing in gold has become very easy along with buying jewellery. Jewellery in India will never loose its charm, but now, investors in India are also taking advantage of Paper Gold. The Paper Gold options available in India are, Gold ETFs, Gold Mutual Funds and E-gold. These options allow great price transparency and also as negates the risks of storage and theft.

So, celebrate this Akshaya Tritiya, the Golden day, with holy Puja, Paper Gold and ofcourse, our favourite gold jewellery from Johareez.com.