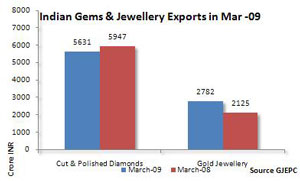 Indian diamond processing industry has got a new life with the global economic recovery that has seen a sharp rise of 20 per cent in the export orders for Christmas and New Year.

Generally the August marks the beginning of export orders which continues till October end and finished jewellery products are delivered within 45 days of booking.

Countries like US prefer the delivery a month before Christmas for the display in their showrooms. Even this year the delivery would get completed by November end for which the last minute orders are still flowing in.

As per a senior official from one of the largest jewellery exporters, “We have regained last year’s lost ground. We cannot say whether the entire industry has gained the same rate of growth.

But, there is a general consensus that the Indian diamond processing industry has achieved the level of export orders in 2007.”

The apex body, Gems & Jewellery Promotion Council, estimated that India’s export to the US was declined on these two occasions by 20 pr cent that counts about 40 percent of total sale.

The US market faced an economic recession with Lehman’s bankruptcy to which India supplies 75-80 percent of ready jewellery.

According to the data by GJEPC jewellery export has turned to a positive territory with a marginal growth of 2.26 percent in the shipments in September that has over come a sharp decline of over 30 percent early this year.

Hopes of small processing units have been dashed with sudden appreciation of rupee, which is refraining them from accepting fresh orders.

Praveen Shankar Pandya, chairman of Diamond India Ltd and managing director of Revashankar Gems Ltd, said that rupee’s appreciation will have a great impact on profit margins as 60 percent of orders are assigned in dollars.

Since the first week of September rupee has witnessed appreciation over 6 percent which is equal to the most medium sized diamond processing units.

But Pandya further said that in order to avoid getting blacklisted Indian exporters will have to meet the commitment in spite the forecasted loss.

“Diamonds are an import-based industry which hedges its risk fully against orders. If export orders for finished jewellery are booked at the rupee value, which is higher than its rate on the delivery date, then exporters will make losses,” said Sabyasachi Ray, Executive Director of GJEPC.

“Though, we have not yet spoken to our members, the observations are that makers of lighter-weight jewellery will find it difficult going in the current volatile market, while heavy goods still face supply shortage,” Roy added.

Hope the diamond processing units in India are able to meet the supply rate and the finished jewellery products are exported on time to different counterparts.